The story of Mulan is a Chinese folk legend. There have been written numerous versions of the tale focusing on different aspects, such as the dynasty, her hometown or family. The only constant is the character of Mulan, who undoubtedly is one of the most legendary women ancient China. One of the editions, “XiaoLie Jiangjun Cixiang Bianzheng Ji” (孝烈将军祠像辨证记), from the Yuan-Dynasty, describes Mulan as a female general who is both obedient, just and unyielding. In other words, Mulan is living a genuine life. She lived in the northern Wei-dynasty (386-534 AD), which is the equivalent to the late Roman Empire in the West.

Westerners are also very fond of Mulan. In 1998 Disney spent two whole years, 100 mil. USD, and employed more than 700 artists to create the animated movie Mulanthat had the very first Chinese female protagonist displayed on the bright Disney-screen. Compared to the tales of Snow-white and Cinderella where the female protagonists seek for a prince or loved one, Mulan is unique in the way that Mulan is far more self-conscious than any other princess. In this way, Mulan fundamentally turns the model for all previous Disney-princess movies upside-down. 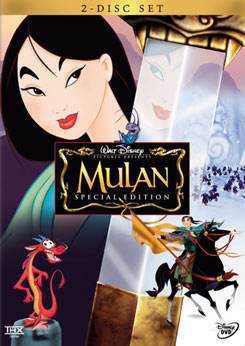 In the film, Mulan is a super heroine who pursued individual freedom. In the battlefield she used the power of avalanches to defeat the strong Mongolian enemies. Mulan lived in a freer environment. She was reluctant to repress her nature to follow the “Three Obediences and Four Virtues” (三从四德). She dared to ride in the street, and oppose her father at the dinner table to make a decision to sign up for war. She finally realised her motivation: to break the shackles of the traditional views and to live up to her own values.

Moreover, the storyline and the narrative structure of Mulan also follows the Disney formula: Mulan’s failure in the matchmaking ceremony brought shame to the family, and disguised as a man, Mulan replaced her father in the army without permission, she rescued Captain Li Xiang, aided  the Chinese military, saved the emperor. At the end, she triumphed, returned home, and harvested love, all of with characterise a typical Disney “happily ever after”-ending.

The character of Mulan known by the Chinese originates from the ballad of Mulan ”Mulan Ci” (木兰辞) from the Chinese textbooks. It is a poem that almost all Chinese people can recite by heart, and it paints the picture of Mulan as the bravest heroine in all of Chinese poetry. "Mulan Ci” is generally speaking constructed in a narrative way with hardly any idioms, but with an exciting and open ending that lets the reader use his or her own imagination.

The Disney Mulan is filled with comedy and has a relaxed atmosphere, while the Chinese version is in the spirit of something tragic and lonely. "On the northern air comes the sentry’s gong, cold moonlight shines on her coat of steel",  which sets off the hardships of march and mercilessness of wars. This makes a distinct comparison with the scene of her returning home, taking off her battle cloak and putting on old-time dress, adjusting her wispy hair and makeup by the mirror. 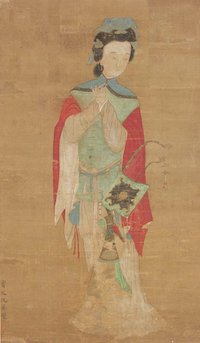 We cannot capture accurately Mulan’s character based on the poem. This ambiguous figure almost gather all the traditional virtues. In the beginning, a deep sigh can be heard among the sounds of the loom and shuttle, that is from Mulan who is worrying about her father. She left home as a teenage girl for a responsibility she felt in her bones, which represents her filial piety and loyalty to the country. Enduring the hardship of hiding her identity for so many years, and surviving from the cruel battlefield, she is bound to be brave and dexterous. At the end of the ballad, Mulan resigned her seat in the cabinet and returned home. It showed both her ignorance of fame and desire for a quiet life.

I recently watched a teaser for the Mulan live-action movie by Disney. The Mulan character, played by Liu Yifei, radiate both tenderness and heroism, and with sharp, upwards slanting eyebrows reaching all the way to her hairline, she really is Mulan, the eastern beauty.

The story of Mulan is a story about women’s self-development and self-consciousness. Furthermore, Mulan is also a cultural symbol, the meaning of which is constantly updated. The influence of Mulan reaches further than just the Venus-meteorite named after her, she has also made into the toyshops, where little children can now buy the yellow-skinned doll. And not to forget, Mulan has provided the Western world with a new image of Asian faces and Asian women.

No matter how the story changes, as I see it, Mulan will always be fortunate. With a false identity, she was capable of living a different life than other women in that period of time. This “all-or-nothing”-choice enabled her to escape far away from her village, water the horse by the Yellow River, cross mountaintops and passes, and achieve her goals. From to the two thousand yearlong feudal societies, the names shining bright in the annals almost solely belong to men. The only exception is Mulan, she is Chinese heroine that arouse the people’s pride. She was brave enough to make a decision and live that very life that other women didn’t even dare think of.

In the end, love is nothing but an old legend, and the willow trees in the Yumen-Pass, the lonely smoke rising in the desert, and the settling sun the scenery that the eye rarely catches a glimpse of.