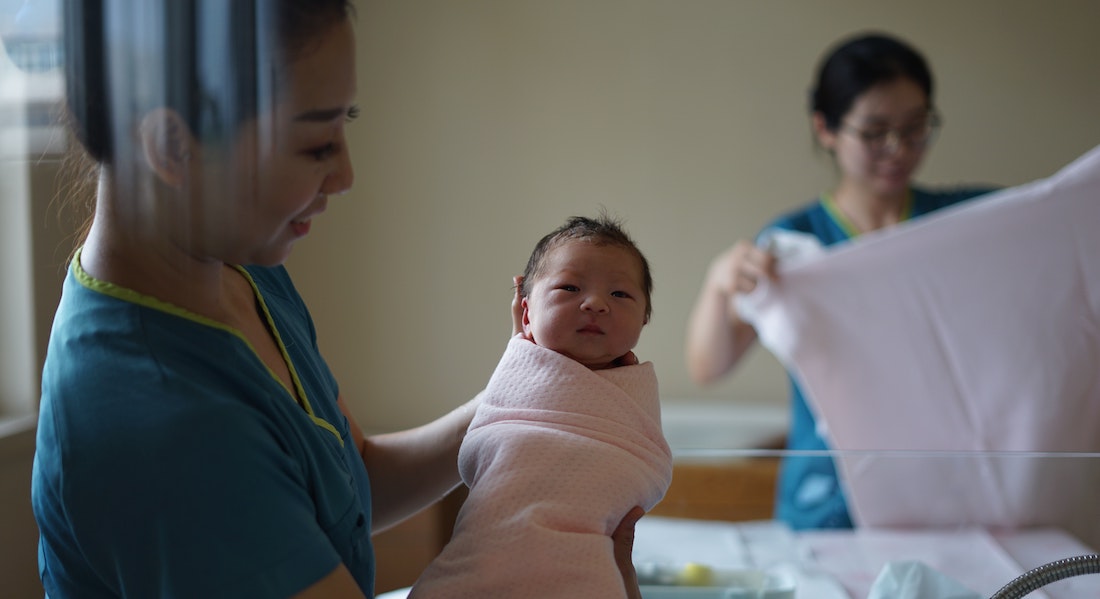 From the late 1960’s to the late 1990’s, China’s fertility rate dropped from more than 6 babies per woman to 1.6. This astounding fertility reduction has often been ascribed to the implementation of the one-child policy in 1979, one of the most drastic birth planning policies in history. Indeed, the mere scale and radicalness of the one-child policy makes it seem like the natural conclusion that this has been the primary factor in China’s fertility drop.

However, this notion is worth a re-examination. While China’s fertility was dropping, the country went through a major economic upsurge and dramatic increase in living standards, five-doubling its GDP per capita between 1980 and 2000 and again between 2000 and 2010. According to classic demographic transition theory, as countries develop better economic foundations, reach higher living standards and become urbanized, mortality will decrease, and children become less important in the work force. This in turn reduces the need of having many children, thus leading to a fall in fertility. While this simplified model has its limitations, the same overall trend can nevertheless be seen in many places today: as societies get richer, healthier and better educated, fertility declines.

This raises the question: is China’s fertility decline really the result of government intervention, or can it be partly or even better explained by socioeconomic development?

A map of China’s fertility 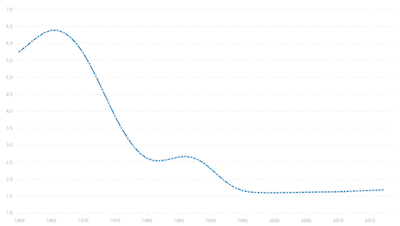 The graph above shows China’s total fertility rate – the average number of babies each woman would have over the span of her life if following birth trends from a given year – between 1960 and 2017. The first thing to notice is that the most drastic fall in fertility, from 6 to 3 babies per woman in the span of a decade, happened in the 1970’s and thus prior to the one-child policy. At the onset of the policy, the fertility rate was already down to 2.7, and it didn’t immediately drop in the years after, but fluctuated throughout the 1980’s. There was even a slight increase before it dropped again by the end of the decade. This happened despite the fact that the first years of the policy saw the strictest implementation, the first relaxations occurring around 1984-86.

Many scholars have determined the dramatic drop of the 1970’s to be due in large part to the lesser-known ”later, longer, fewer” (wan, xi, shao 晚、稀、少) policy: another form of family planning that preceded the one-child policy. This campaign was enacted in the early 1970’s and propagated later marriage (wan 晚), longer intervals between children (xi 稀) and overall having fewer children (shao 少).

Scholars disagree about the level of coerciveness used in this policy. Some claim it to be mostly collaborative and voluntary, while others emphasize that it contained several coercive components, such as pressure to get sterilized or get abortions. Regardless, it is clear that the policy was less draconian than the subsequent direct limit of one child per couple, yet it still managed to bring China’s fertility down by half in a mere 10 years.

A second factor to look at is fertility variation within China. Despite the one-child policy being a national policy, fertility rates did not develop uniformly all over the country. In fact, they differed significantly between provinces over the span of the policy.

However, the implementation of the one-child policy also differed across provinces. The policy was enforced with varying degrees of rigor, and certain exceptions to the one-child rule were present in some places but not others. Generally, many ethnic minorities and families in rural areas were allowed to have more than one child, and both groups constitute a larger percentage of the provinces with higher fertility rates.

Thirdly, if we compare China’s fertility to that of other major Asian countries, we see that China was not the only country experiencing a substantial fertility reduction in the second half of the 20th century. 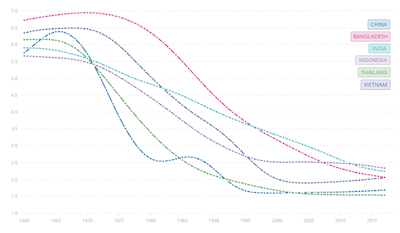 All of the countries shown in the graph above reduced fertility from more than 5.5 to less than 2.5 between 1970 and 2015, while in the same period they all increased their GDP per capita and life expectancy quite substantially.

However, as is also apparent in the above figure, the speed and timing of the fertility reductions were not quite the same. While all six countries underwent considerable change, none of their fertilities, with the exception of Thailand, declined as early or drastically as China.

As discussed earlier, China’s initial sharp decline happened before the implementation of the one-child policy, but China’s fertility nonetheless reached sub-replacement level – that is, below the level (usually 2.1) required for a population to sustain itself – already by the early 1990’s. Meanwhile, India, Indonesia and Bangladesh have not fallen below 2. Seeing as a serious economic boom didn’t hit China until the start of the 21st century, one could argue that even if China would eventually have reached sub-replacement fertility without government intervention, the one-child policy accelerated that process by at least a decade, thus preventing a large number of children from being born.

Furthermore, it is possible that a relation between fertility and development works the other way as well: it could be that fewer children born has been one of the dynamics allowing for China’s rapid socioeconomic development.

In the above comparison, an important factor to note is that most of these countries have also had various forms of birth planning policies. None of them, however, were as interfering and coercive as the Chinese one-child policy. Some countries, like Vietnam, had a two-child policy, while others, like Thailand, focused primarily on expanding the access to contraceptives.

A possible conclusion could be that the one-child policy sped up a process that was already underway and made fertility drop sooner than it would otherwise have, but that socioeconomic development was the more crucial factor in the long run for keeping the fertility stably at a low level. However, the topic is still an open question, and there is no scholarly consensus as to what has been the main factor in China’s long-term fertility reduction. Issues like the possibility of unreported births skewing the statistics further blurs the picture.

Nevertheless, it is worth considering the notion that maybe the one child-policy wasn’t as crucial a factor in China’s fertility reduction as it has often been given credit for.