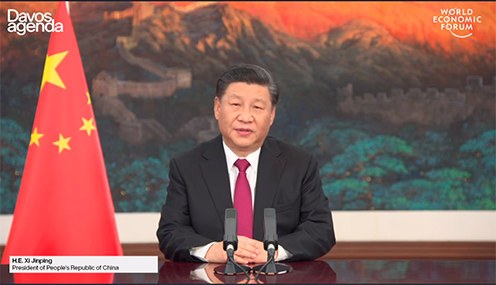 Four years ago, the Davos elite applauded President Xi Jinping in almost guru-like fashion when he spoke at the annual session of the World Economic Forum. At the time, he spoke on behalf of the only superpower that championed globalization and multilateralism. President Trump stayed away, and turned his back on such figments of the past.

In his on-line speech to the current World Economic Forum on 25 January, Xi insisted on similar ideas as in 2017. There is no way that we can revert the wheels of history, he said. China will continue to be a champion of globalization, of beneficial reforms of the global multilateral system, and of a common path to deliver global public goods such as mitigation of climate change.

Now, the US has a new President. While President Xi did not name him, he did call him out. “Abandon ideological prejudice!” said Xi. Recognize that difference in itself is no cause for alarm. Forget arrogance, prejudice and hatred and do not impose hierarchy on the rest of us. Do not build small circles or start a new Cold War.

Speaking to us all, Xi argued that the world needs to get out of the current recession as soon as possible. China is open to joining hands and cooperate to deal with the effects of the pandemic. Xi’s tools are not new. They include macro-economic coordination and a stronger role for the G20. Xi is not a revolutionary. He stands for incrementalism in reforming the international economic and political systems, insisting that China must be in the central spot.

The conditions necessary to promote global collaboration are clear, argued Xi,. China demands respect for the basic principles it promotes in international relations and collaboration and for its “core” interests. However, he did not acknowledge that China’s position is different from that of 2017. His guru-like aura has vanished amid a backlash against China, not only from the US but in many parts of the world.

In fact, Xi Jinping talked himself into some of the minefields that have caused opposition to China, even from some of its closer partners. He thus invited to stick to the “common values of humanity, i.e. peace, development, equity, justice, democracy and freedom”. While Xi praised these values as universal, he has always argued against the existence of universal values in the past. This statement begs further clarification from those who see China as a country with a democracy deficit.

Xi also stated that: “Without international law and international rules that are formed and recognized by the global community, the world may fall back to the law of the jungle, and the consequence would be devastating for humanity.” While no-one would doubt Xi’s multilateral inclination, China has clearly demonstrated that it does not accept international law if it goes against its “core” interests, for example in relation to competing territorial claims vis-à-vis its neighbors around the South China Sea.

The international community might also ask what President Xi was thinking of when talking about China’s new development paradigm “with domestic circulation as the mainstay and domestic and international circulations reinforcing each other”. Will this help bring the trade war with the US to a close or does President Xi herald new difficulties for foreign investors and companies? Will the newly agreed EU – China Comprehensive Agreement on Investment (CAI) help pave the way for solving the outstanding market access problems?

In a situation where the two existing superpowers are engaged in intense rivalry, one can only hope that their leaders will soon discuss these issues eye-to-eye. Certainly, President Biden was called today. Xi Jinping’s cards are on the table. Next question: how will President Biden play his cards?

Watch the whole speech here or read a transcript here