Laurits Andersen - Birth of an Entrepreneur

Peter Harmsen holds a PhD in China Studies from the Department of Cross-Cultural Studies, University of Copenhagen. He is an author and has been working as a journalist in East Asia for more than 25 years. In 2020 he published the book “Laurits Andersen – China Hand, Entrepreneur, Patron.” This blog series is published by courtesy of Laurits Andersens Fond.

Claus Laurits Andersen was born on August 6, 1849 in the village of Ømosen near the port city of Elsinore at Zealand, the second son of a carpenter. He was born into a community steeped in the Protestant values of thrift and diligence, which were to become key parts of his personality in later life. In 1850 the family moved to Copenhagen. Both Laurits Andersen and his elder brother received free education at the Garrison School attached to the capital’s Sølvgade Barracks. Even late in life, Andersen considered this a major benefit that equipped to meet future challenges. “All the skills that I brought with me when I left Denmark had been given to me for free at that school,” he told a visitor when he was in his late 70s.

In October 1863, after completing primary school, Andersen’s new life as an apprentice began at J.G.A. Eickhoff’s Machine Works, a maker of mainly printing presses set up by a German immigrant in Copenhagen.

Towards the end of his apprenticeship, when he was still only 17, Andersen was sent on unaccompanied missions to help clients install newly-built machines. In the middle of May, 1867 he went to the Elsinore on such an assignment, and in July of the same year, it brought him to Malmo in Sweden on his first ever trip abroad. The fact that Andersen was entrusted with work at this level even when he was still an apprentice suggests a precocious level of maturity and responsibility apparent to his surroundings at an early age.

Laurits Andersen, whose brother Robert was already a sailor, had known for some time that he wanted to see the world.

Based on the available sources, it is not possible to establish with certainty if and to what extent Laurits Andersen’s desire to go abroad, and to the see the East, was prompted by his older brother Robert. However, it stands to reason that he was of some influence, at least as a role model. Robert Andersen had become a sailor at an early age, and he had established himself in Asia a few years before Laurits Andersen’s arrival. The two brothers were typical of their generation, insofar as they emigrated, as did 285,000 other Danes in the period from 1869 to 1914. However, their decision to go to Asia set them apart, as only 745 other Danes, or 0.2 percent, did the same thing during the 45-year-long period. 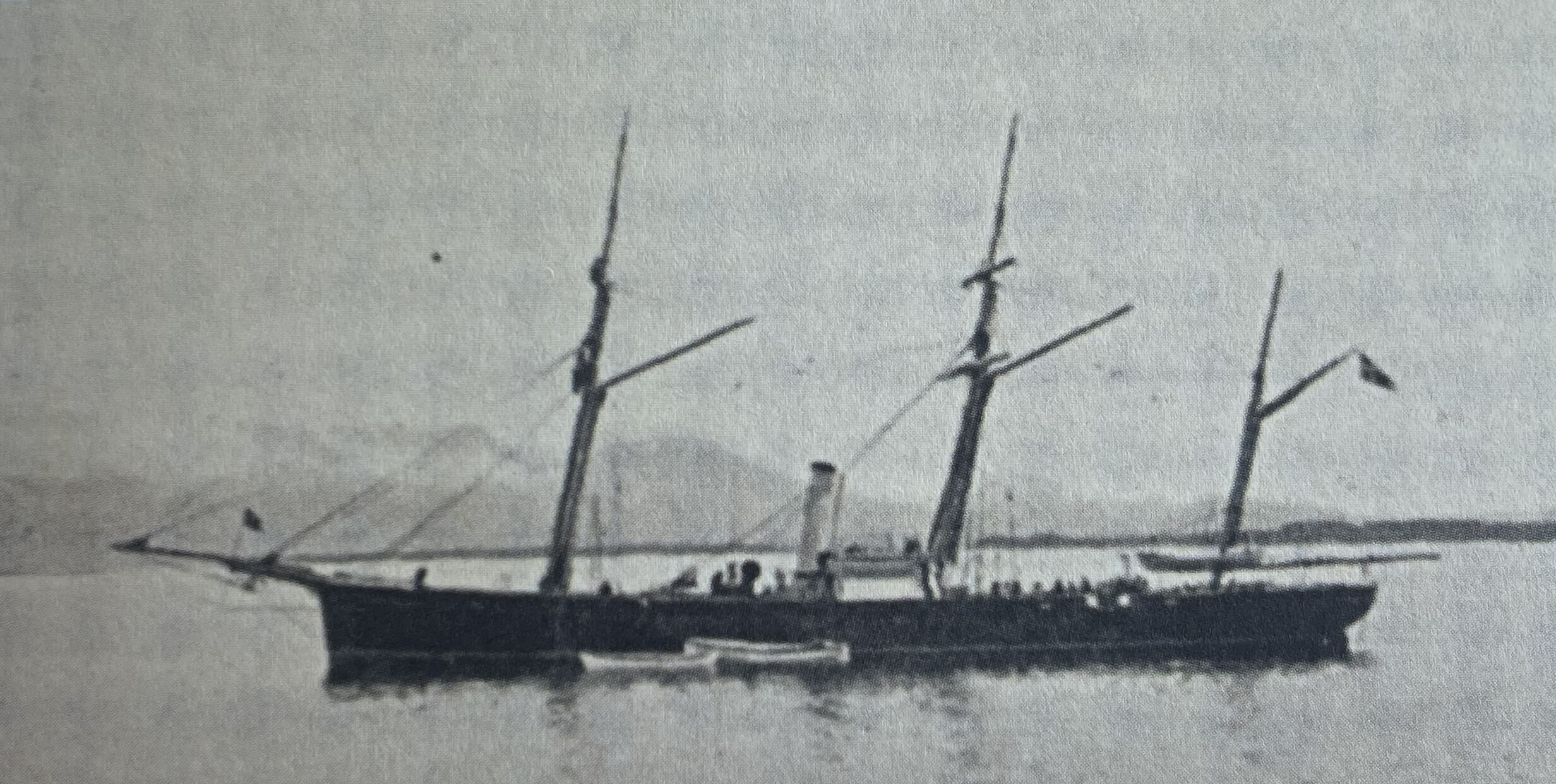 In early 1870 Andersen left Denmark on board the naval schooner Diana, disembarking in Scotland, where he had found employment with the shipbuilding company Henderson, Colbourn & Co. He stayed for almost half a year and benefited greatly from experience he accumulated there and he was determined to venture further into the world as soon as possible.

Andersen arrived in Hong Kong harbor on October 28, 1870. This was the beginning of what may very well have been the most desperate period of his long life in Asia. He only had 11 dollars left, and for a few days he got by on bread priced at 5 cent a piece, as well as tea. He spent the nights sleeping out in the open along Queen’s Road, which at the time was in the middle of notorious district filled with drunk sailors and roaming vagrants. In his autobiography, he explains his growing sense of desperation: “After my arrival I got busy trying to find a job. I looked searched every place where I thought there might be some employment. I also rented a Sampan (boat) [Andersen’s own addition] and passed by every steamer in the harbor offering my services as an engineer, but all vacancies had been filled. A week passed like this, and the money I had brought from Singapore was almost exhausted.”

An almost incredible coincidence saved Andersen from this predicament. One morning he was sitting on a bench in Hong Kong harbor finishing up a breakfast consisting of bread when a sailor sat down next to him. After a short conversation the two men realized they were related. “It turned out, to the great surprise of both of us, that the man was my uncle Bob Smith, the brother of my stepfather.” His real name was Rasmus Johansen, but he had assumed an English name to connect more easily with captain and pilots along the China coast. Bob Smith was a popular man in Hong Kong, and when he introduced Andersen to his acquaintances, he was accepted with open arms – even among people who had previously turned him down. “Oh well, they said, if Bob Smith is your uncle, that changes everything. Of course, we will find a job for you.” 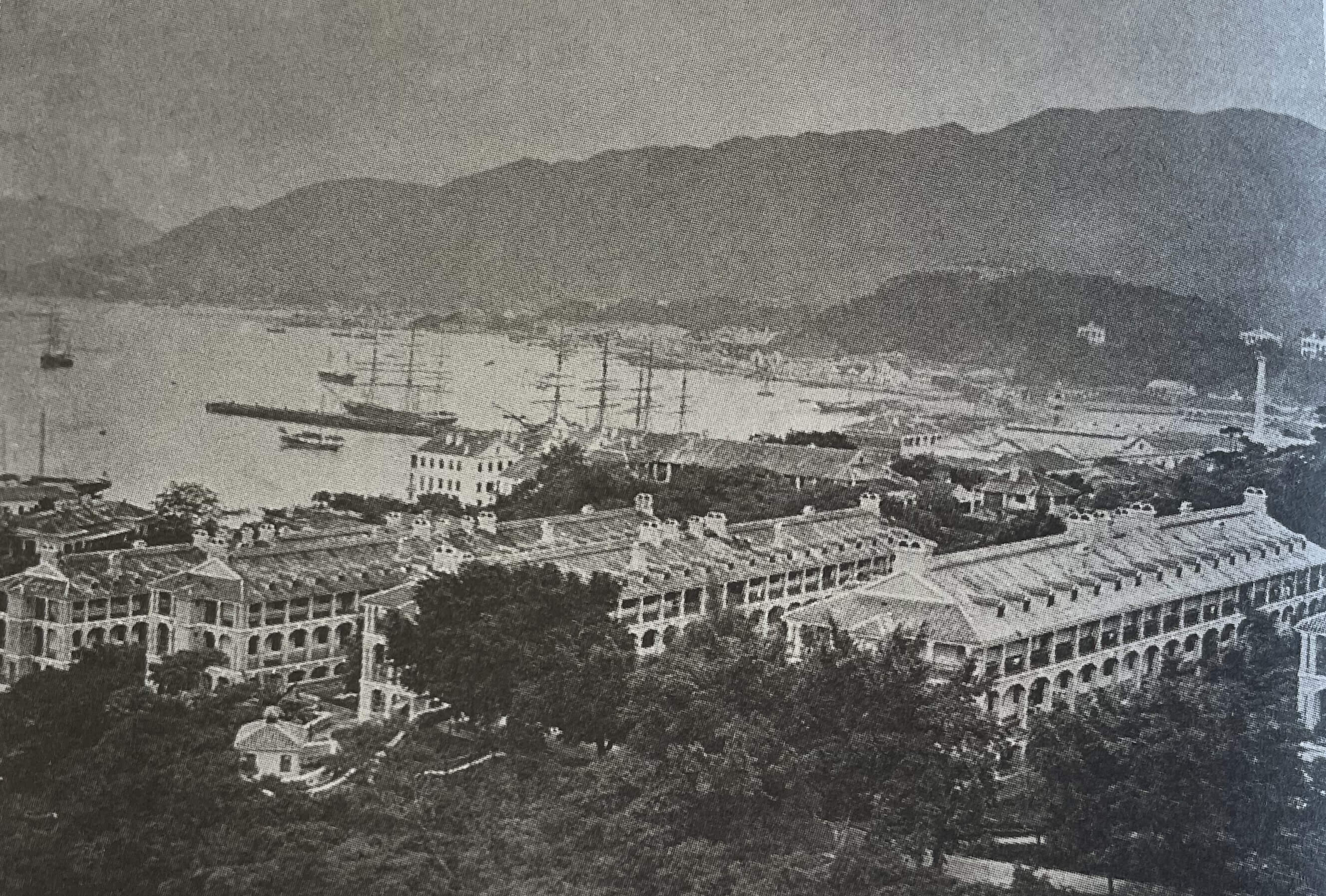 Now Andersen was finally in luck. In his autobiography he describes how “a Mr. Inglis sent me onboard a Spanish steamer with his recommendations,” gaining him employment as an engineer on board the vessel. Probably the person referred to by Andersen is John Inglis, an influential Chinese-speaking entrepreneur involved in a range of ventures, including a shipyard that had a successful business building small steam vessels for local corporations.

Andersen was happy about the salary, which was 75 dollars a month, in addition to board and lodgings. Still, it was hard work, and the tropical climate was an added hardship for Andersen. At the same time, he was informed by an acquaintance in Shanghai that he would stand a much better chance of swift success in that city than in Hong Kong. In mid-spring 1871, he quit his job on the Spanish steamer and traveled to Shanghai on the steamer Leith, which left Hong Kong on March 21. Later there would be rumors that Andersen, who would one day become one of Shanghai’s wealthiest citizens, spent his first night in the city under the open sky, sleeping in a park on the Bund, Shanghai’s world-famous waterfront. By 1870, Shanghai had grown by leaps and bounds, but it still had less than 80,000 inhabitants, including 1,666 registered foreigners. When Andersen later looked back at his first encounter with the city, he called it a “swamp by the river.” This characterization was probably influenced by the fact that due to his modest means he was forced to keep to the less inviting parts of the city. 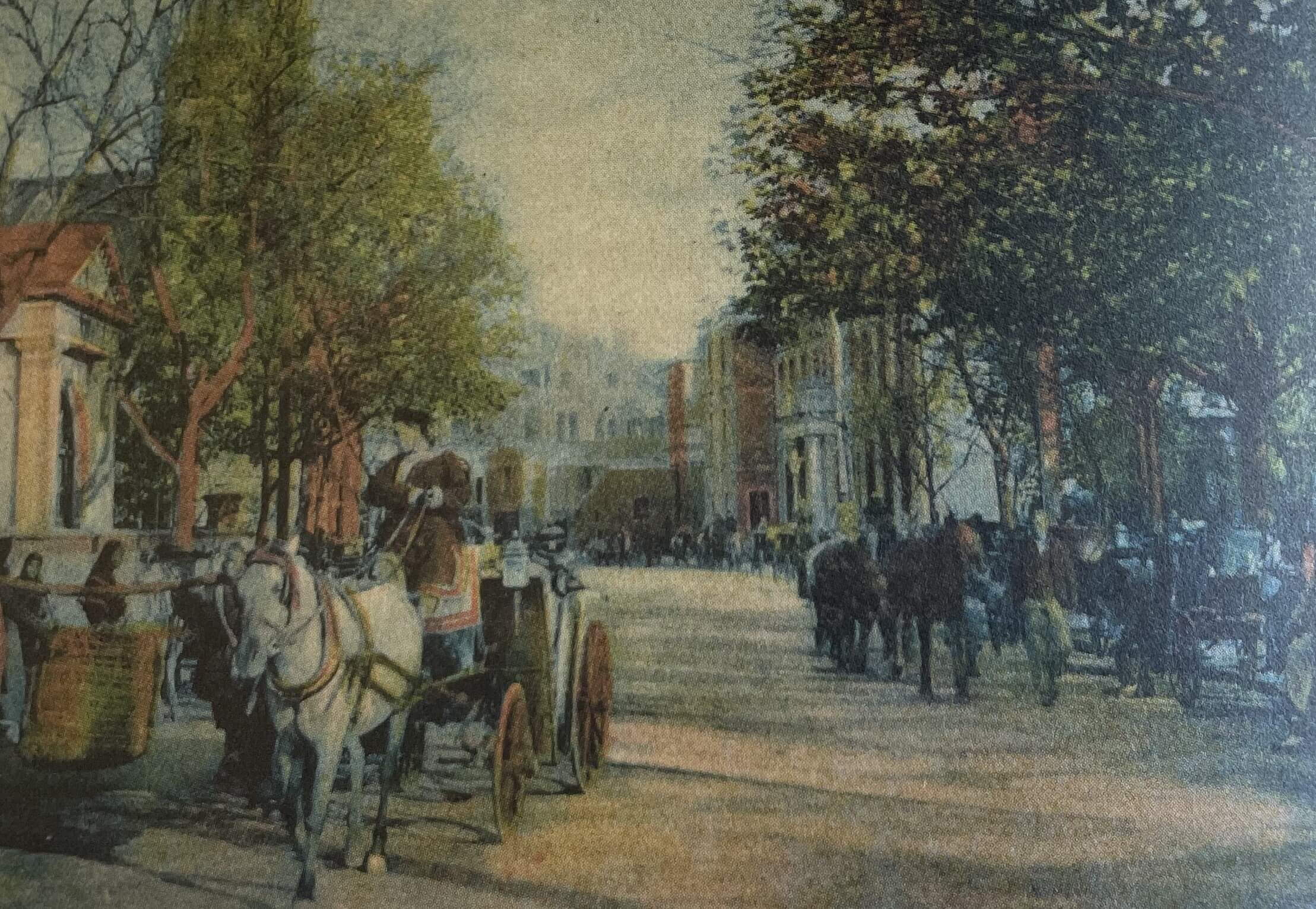 Immediately upon his arrival in Shanghai, Laurits Andersen got a job with Shanghai Steam Navigation Company, a subsidiary of Russell & Co., which was the biggest American trading firm in China in the second half of the 19th century. In its heyday in the 1860s it operated 43 steam ships along the China coast and up the Yangtze River. Andersen spent the following years at sea where he got to see all parts of China.

Andersen never became good at the Chinese language. Li Hongzhang, who held the official title of viceroy of Zhili province, had gradually become the closest foreign associate and described Andersen in one of his letters ““the Westerner Andesheng”. Since Andersen knew no Chinese, and Li Hongzhang spoke no English, they were forced to communicate through an interpreter, but their relationship nevertheless appears to have been excellent. “It was impossible to make him smile, but I understood that he was satisfied, and when he inspected my work at the dock upon completion, he acknowledged it by putting his thumb up and saying How! At least I knew enough Chinese to understand that this meant Good, or He is good!” 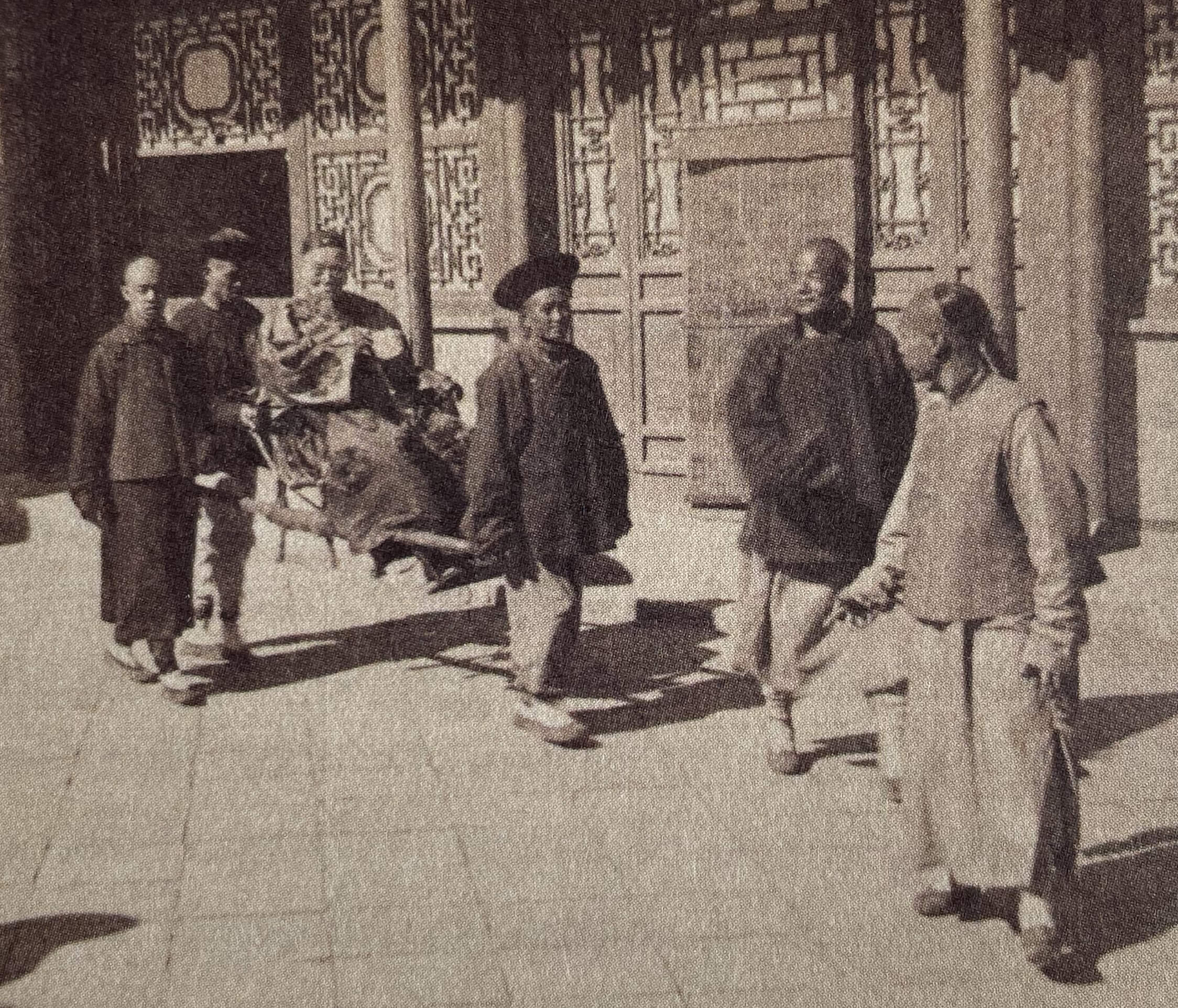 Li Hongzhang who was one of the most influential Chinese goverment official and an important connection for Andersen in China.

Laurits Andersen entered a period of prolonged deliberation about his future, asking himself if he wanted to continue work as a sailor. Eventually, he decided to put his life at sea behind him for good, and by the end of the 1880s he had begun a new life on land, embarking on a career as a businessman and an entrepreneur. Possibly in the same period, Andersen for the first time ever worked with a company that in the long run was to have a profound impact on his career in China, the Shanghai-based trading firm Mustard & Co.